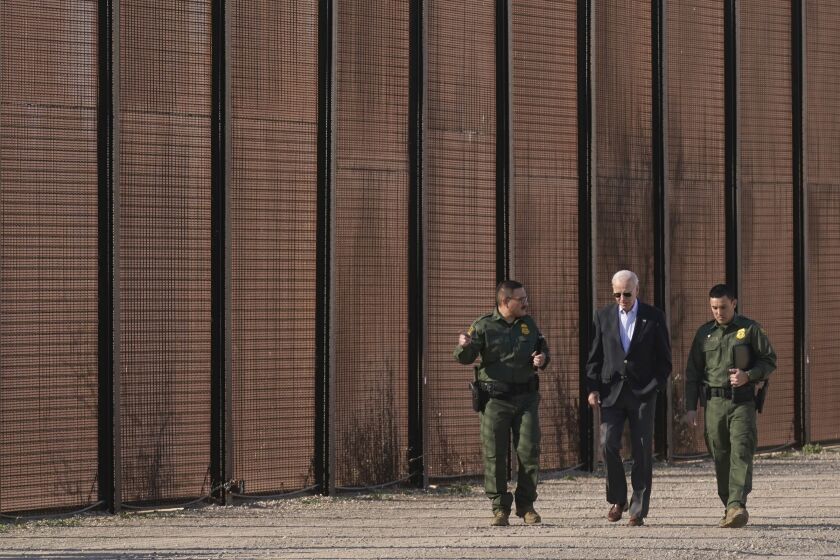 As President Biden stepped off Air Force One in El Paso to tour the US border on Sunday, Texas Gov. Greg Abbott was on the tarmac waiting.

After greeting the president, the combative Republican governor handed Biden a sharply worded letter in which he criticized him for pushing “open-border policies” and demanded that he resume construction of the border wall promised, but never completed, by former President Trump.

It was the latest round of political theater for Abbott, who describes the stream of asylum seekers arriving at the southern border as an “invasion” and who in recent months has spent millions of taxpayer dollars busing recently arrived migrants to Democratic-run cities on the East Coast.

It also underscored the fundamental challenges faced by Biden, whose recent efforts to address a historic surge in migration have angered not only Republicans but also some members of his own party and human rights advocates.

After Biden announced last week that he would expand a Trump policy giving border agents the power to quickly turn back asylum seekers, he was slammed in a joint statement by several Democratic senators for “stranding migrants fleeing persecution and torture in countries unable to protect them. “

As Biden met with immigration agents and humanitarian aid workers in El Paso on Sunday, walking along a section of border fence and touring a welcome center for newly released migrants, one thing was clear: On an issue as intractable as immigration, which for decades has vexed politicians on both sides of the political spectrum, there are no easy solutions.

Tensions have flared in recent months as a record number of border-crossers arrive from Latin America, where political instability and the economic ravages of the COVID pandemic have resulted in millions of people fleeing their homes.

Tens of thousands have arrived in and around El Paso, with many crossing the border on foot illegally and requesting asylum.

While migrants from Mexico, Central America and elsewhere have been swiftly deported under Title 42, a rule invoked by Trump that allows the government to keep out foreigners during a public health emergency, migrants from the troubled nations of Cuba, Nicaragua and Venezuela were until recently allowed to enter the US, given temporary work permits and granted asylum hearings.

Here in El Paso, shelters have been overwhelmed, and migrants have resorted to sleeping on the streets. Last month, as temperatures dipped below freezing, Democratic Mayor Oscar Leeser declared a state of emergency.

Days before his arrival here, Biden announced new policies that he vowed would “substantially reduce” the number of people attempting to cross the border in order to relieve pressure on cities like this one.

Under new guidelines announced Thursday, Cubans, Nicaraguans and Haitians who enter the country illegally will be immediately deported to Mexico — without their asylum claims being heard.

It is an expansion of a Biden policy enacted late last year aimed at Venezuelans, who at that time made up the majority of asylum seekers crossing the border.

The Biden administration says that policy reduced the number of Venezuelans who crossed the southwestern border without authorization from 1,100 a day on average to around 100 a day.

At the same time, Biden announced a new pathway to legal entry for people from the four countries, saying that as many as 30,000 of them would be allowed into the US each month if they applied via an online application from their home country, found a US-based sponsor and passed a rigorous background check.

The administration says the two-pronged approach will deter migrants from taking a dangerous journey to the US border.

But it also strands tens of thousands of people who have already left their countries and begun the dangerous passage towards the US Many of them are stuck in cities like Juarez, across the border from El Paso. Others sneaked into the United States and have avoided immigration authorities.

In downtown El Paso, hundreds of migrants in that second category have been camped outside a red brick Catholic church called Sacred Heart. They are afraid that if they leave the church grounds, they will be arrested by immigration authorities and deported.

“If I knew they were going to close the doors, I wouldn’t have left my country,” said Lisbeth Leon, 47, a Venezuelan who began her long journey to the US in September when she heard that large numbers of Venezuelans were being let in.

“My kids call me a warrior,” she said. “I’m afraid that after having crossed nine countries to get here, they will send me back.”

Leon and others have been amazed by the kindness of strangers, who have donated food and clothing and have even offered free haircuts.

It was a sign, they said, of just how much the US has to offer.

“I’ve never had this many clothes in my entire life,” said Eduardo Tapia, 28, a gay man traveling with his boyfriend. Back in Venezuela, Tapia said, “I was so hungry I sometimes ate banana peels.”

Jose Ibarra, who owns a cabinet-making company in Albuquerque, four hours away, had come to the camp to see if he could help.

He said he had friends in construction back in New Mexico who were desperate for workers.

“I could easily place about 20 people with a job,” Ibarra said. “But the question is how to get them out of here.”

Biden’s tour of the border did not take him through the stretch of downtown El Paso where most of the migrants have been staying. He stopped to walk along an 18-foot-high section of mesh border fence, through which the homes of Juarez were visible.

The one thing that everyone he encountered seemed to agree on was that more resources were needed.

That’s what he learned from meeting with border agents, and what humanitarian aid workers told him.

“If I could wave the wand, what should I do?” Biden asked an employee at the El Paso County Migrant Services Center, which offers food and clothing to migrants who have been released by the Border Patrol. The answer was more funding.