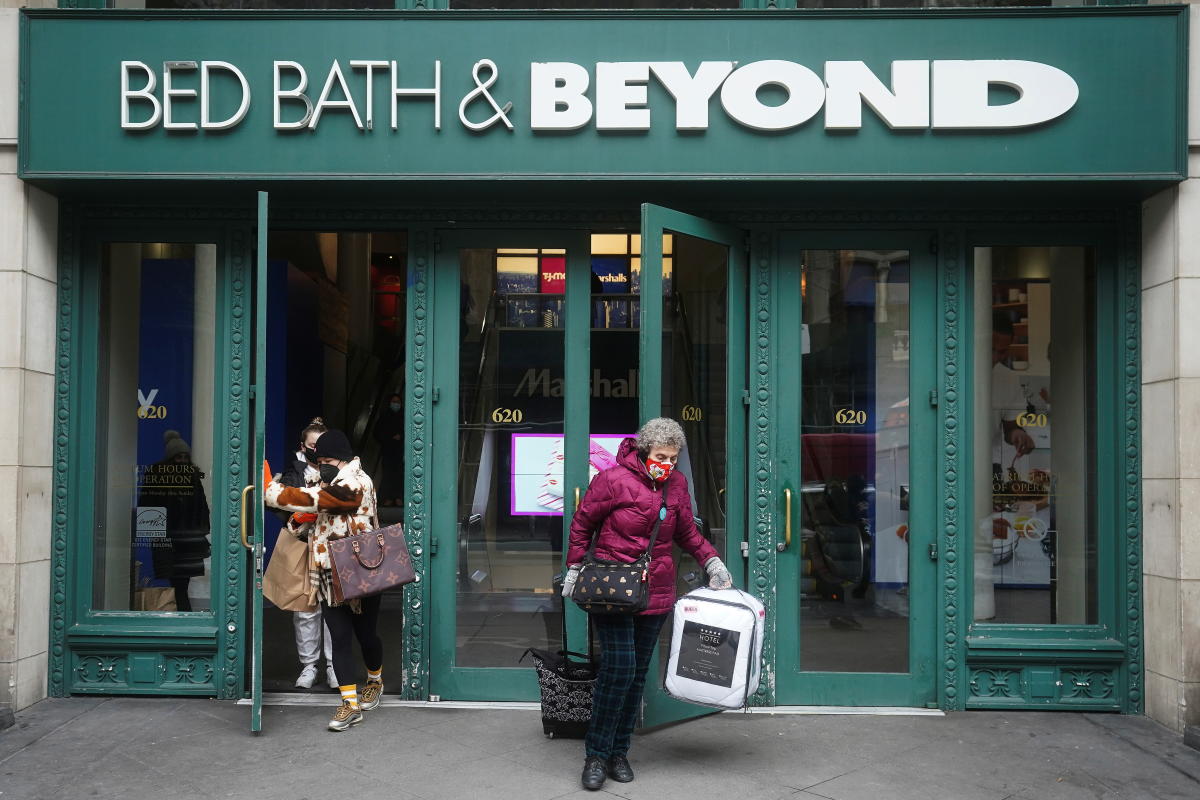 The end of an era may be coming: Bed Bath & Beyond (BBBY), once one of the US’s most beloved home furnishing retailers, is reportedly eyeing a bankruptcy filing in the coming weeks.

From simple beginnings to becoming a national retail titan that sold everything from coffee makers to candy, the company’s more than 50-year long journey has been both adventurous and chaotic.

Here’s a look at the years leading up to its current near-death state.

In 1971, they opened the first linens-only “Bed ‘n Bath” store in Springfield, New Jersey. Their bet was spot-on: The 1980s brought a rise in consumerism, Walmart-driven price deflation, and new retail economics that led to booming business in suburban America for big-box retailers. The popularity helped Bed n’ Bath expand out of its home state of New Jersey with more products and in 1987, it added the “beyond” label to its corporate name.

Bed Bath & Beyond was the classic “category killer” of the 1980s and 1990s, similar to the now-defunct Toys “R” Us. Category killers represented a new wave of superstores that featured high inventory and low prices in their specific category, like home goods. Customers got a wider range of merchandise to browse from than that of smaller, more local businesses.

In its prime, Bed Bath & Beyond featured prices low enough throughout the year that sales events were no longer calendar-worthy for customers. It didn’t require a million-dollar advertising campaign to lure in shoppers — just the big blue coupons in the snail mail with which customers have become well acquainted.

The company went public in June 1992, initially trading around $1. Sales crossed $1 billion in 1998. The company powered through recessions and kept sales soaring as more households formed in the United States.

Soon, the paper coupons that Bed Bath & Beyond thrived on became vintage as more Americans moved to online shopping in the early 2000s, allowing customers to compare prices with other stores and use coupons digitally. Bed Bath & Beyond was late to this internet boom, which was pioneered by competitors like Target (TGT) and Amazon (AMZN).

After the start of the new millennium, the company appeared resistant to the constantly-evolving new era of retail.

Steven Temares, who started at the company in 1992 as a real estate lawyer, became CEO in 2003 and did not relinquish that role until 2019. The company’s founders remained board chairs. And others on the board had scattered retail and tech experience. At the same time, profits took a hit from online rivals, but it didn’t stop Bed Bath & Beyond from opening more stores with reckless abandon.

The good days for Bed Bath & Beyond quickly became the good old days. After the stock hit an all-time high of $70 per share in January 2014, a volatile period followed until March 2015, and the stock fell below $40 a share in the latter half of 2016 amid softening sales.

In 2019, year-over-year quarterly revenue growth started consistently coming in negative. On October 9, 2019, the company tapped Mark Tritton, Target’s former chief of merchandising, as CEO. The stock soared 21% that day on hopes of a big turnaround.

Tritton gained early praise on Wall Street for his efforts to close under-performing stores, trim expenses, overhaul the merchandise assortment, and revamp the look of the stores. And the company’s bottom line began to improve, raising hopes that Tritton would pull off a retail turnaround for the ages.

Then the COVID-19 pandemic hit, and retail stores were closed across the nation due to health concerns.

Higher e-commerce sales during the pandemic kept Bed Bath & Beyond afloat, but it still lagged behind rivals like Target as the latter sold food. Meanwhile, online-first retailers of home furnishings such as Wayfair (W) boomed.

As the US economy reopened, Bed Bath & Beyond loyalists returned to the stores only to find their favorite brands were removed. In their place were an avalanche of private label brands from Tritton designed to pump up profits. The stores were in general disarray, too, as all the old merchandise Tritton no longer wanted to sell was heavily discounted.

The stock fell below $4 per share in April 2020 but jumped in 2021 as COVID restrictions lifted and new retail traders piled into various individual stocks, including $BBBY. Tritton brought forth a post-pandemic rescue plan of closing underperforming stores and remodeling others while arguing that $BBBY was a momentum stock as opposed to a meme stock.

“Customers are able to envision themselves in their own homes, as opposed to shopping off the shelf and then trying to work it out later,” Tritton told Yahoo Finance in an interview in July 2021. “I think that people are so hungry to look and touch and feel and kind of just wander and find things in store, and we really wanted to play off that.”

However, additions to the shopping experience — including coffee shops, a new app, shop and scan, and more in-store customer experimentation with products — could not reverse the trend of increasingly slowing sales.

‘We are in the end days’

In March 2022, $BBBY stock showed signs of life once again after activist investor and GameStop (GME) chairman Ryan Cohen took a 9.8% stake in the company and presented the company with a roadmap to restore itself to credibility.

Redditors of r/wallstreetbets hailed Cohen as “the meme king who will reign for 1,000 years,” and the stock rose as high as $27.23 before continuing its years-long downward trend. Later in 2022, Bed Bath & Beyond stock spiked, causing a short squeeze: On August 16, the stock popped by nearly 70%.

Earnings showed a different reality. In late June, Bed Bath & Beyond ousted Tritton and ended its second quarter with a mere $107 million in cash after a quarterly loss of $224 million for its adjusted operating profits.

“We are looking at a situation in which this company is probably not going to be around,” Loop Capital Managing Director Anthony Chukumba told Yahoo Finance Live on June 29, 2022. “We could be talking about months at this point. We are in the end days. These results were a dumpster fire. There’s no other way to put it.”

In July 2022, the stock touched a then-record low on mounting losses and bleak outlooks.

One retail expert said the liquidity of the company was a “top concern.”

“Bed Bath & Beyond is in a world of hurt because they have burned an enormous amount of available cash, their business has no forward momentum, and now as we all know they have an enormous leadership gap that they will have to fill,” Mark Cohen, Columbia University professor of retail studies and former CEO of Sears Canada, told Yahoo Finance Live in July 2022.

“We have a $1 billion asset-based revolving credit facility,” Bed Bath & Beyond spokesperson Eric Mangan told Yahoo Finance at the time (Mangan left Bed Bath & Beyond in late 2022). “Additionally, we have already taken actions on many fronts — including a reduction of at least $100 million of capex against the company’s original plan. Additional measures are underway, including managing our expense run rate and actions to drive traffic and sales.”

On the ground, stores were showing yawning signs of a possible bankruptcy or major restructuring.

When Yahoo Finance’s Brian Sozzi visited two Bed Bath & Beyond stores in August, he found a messy, untouched pile of discounted and clearance products. There was an overstock of merchandise that customers didn’t want and deserted shelves for seasonal high-demand products like back-to-college items.

By September, the company announced its plan to close 150 stores. On October 26, 2022, board member Sue Gove became CEO.

“It was valiant that they tried to enact a turnaround plan,” Macco CEO Drew McManigle told Yahoo Finance Live. “They came late to it. It wasn’t deep enough or far enough. As an example, they were going to close 21% of their stores, which just isn’t enough.”

Allegations of a “pump and dump” scheme and a lawsuit filed by one shareholder accused Ryan Cohen and the company’s CFO of wrongdoing, which further damaged the stock. Tragedy also hit the company with the passing of CFO Gustavo Arnal by an alleged suicide off a New York City building.

Near the end of 2022, Bed Bath & Beyond had piled up more than $1 billion in debt and losses. They repaid $123 million in stock — and the stock kept sinking.

Bed Bath & Beyond stock closed at $1.30 on Jan. 6, the lowest since the early 1990s as the company floated a potential bankruptcy filing after a brutal holiday season

“The company continues to consider all strategic alternatives including restructuring or refinancing its debt, seeking additional debt or equity capital, reducing or delaying the company’s business activities and strategic initiatives, or selling assets, other strategic transactions and/or other measures, including obtaining relief under the US Bankruptcy Code,” Bed Bath & Beyond said in a statement.

“These measures may not be successful.”

Click here for the latest stock market news and in-depth analysis, including events that move stocks

Read the latest financial and business news from Yahoo Finance