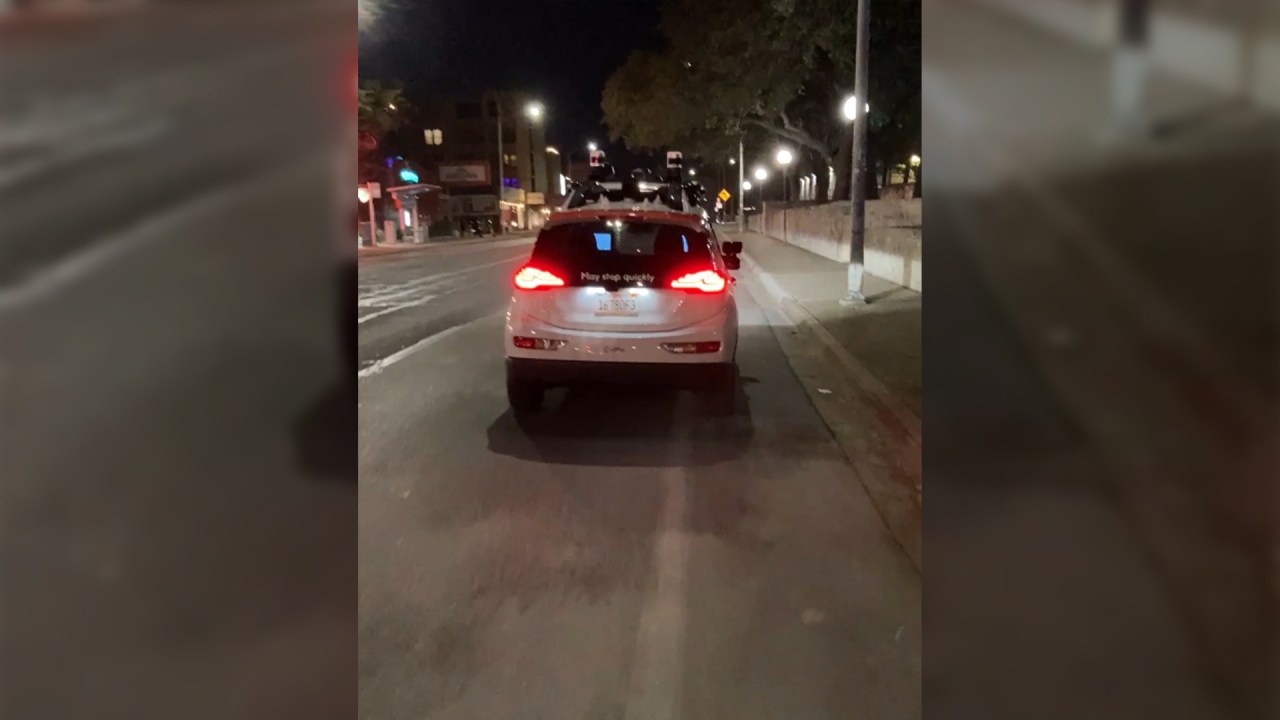 General Motors’ Cruise rolled out its “robotaxi” technology in Austin in late 2022 in addition to services in Phoenix and San Francisco. It marked the latest autonomous vehicle endeavor in the Texas capital in recent years, including the now-defunct Argo AI vehicles launched by Ford, Lyft, Walmart and Volkswagen.

Austin resident Robert Foster lives north of downtown and said he’s seen many Cruise AV cars in recent months, but this was the first time he’d seen one without a safety driver physically in the vehicle. While biking home around 11 pm last Thursday, that’s when he noticed it taking wide turns and driving in the bike lane. He decided to hit record.

“There is no way a bike could have safely been in the bike lane next to it,” he said. “I mean, I hadn’t seen anything nearly that bad from the [Cruise AV] cars up to that point when they had humans in them or humans directing [the cars].”

Moving onto the sidewalk, Foster said he watched a few more Cruise AV cars drive past and make the same turn, each turning wide and ending up in the bike lane.

“A lot of bicyclists, if they’re rushing to do that [light], they would have been side-by-side to it. And that’s when it would really become a dangerous situation,” he said.

A Cruise spokesperson told KXAN Monday the company is reviewing lane-mapping technology in the area to better program the vehicles. They said if a cyclist had been directly alongside the Cruise vehicle in the bike lane, sensors would have picked up on it and triggered the vehicle not to veer over.

“Safety is Cruise’s top priority, not just for our passengers but for everyone we share the road with. Our technology is always improving and we’re reviewing our lane-mapping in that area,” the statement read.

Cruise uses 360° camera technology for a complete view around the vehicle, including radar and thermal cameras, for the company’s safety report. Safety records reported to the National Highway Traffic Safety Administration detailed dozens of incidents involving Cruise across its multi-city network in 2021, with no reported serious injuries or fatalities.

“Our fleet is monitored at all times and remote assistance can be provided as necessary,” Cruise’s spokesperson added.

The two neighborhoods he’s seen a high volume of these vehicles are along West Sixth Street and in West Campus — areas with high pedestrian and cyclist populations, especially on the weekends. Foster said given the drifting into bike lanes, he’d like to see a return of safety drivers in Cruise vehicles while they’re traveling through more pedestrian-centric neighborhoods.

But at the city level, Foster added he wants to see stronger investment in bicycle lane safety infrastructure, especially as Austin continues to test AV technology on its roadways.

“Had there been bollards or flex posts, there is no way the car would have gone over [into the lane],” Foster said. “I really think we should have safety drivers in these cars with the way they’re currently performing because even if they’re doing 99% of the things well, 1% of issues in downtown Austin or Central Austin could put people’s lives at risk risk.”

In a statement, Austin Transportation Department officials said the Texas Legislature passed an amendment to the Texas Transportation Code in 2017 and passed a separate law in 2021 to oversee autonomous vehicle regulations. However, an ATD spokesperson said they continue working with AV companies operating locally to improve safety measures.

“The City has worked with autonomous vehicle companies in the past as they enter the Austin market to offer staff’s knowledge on the local transportation network to help AVs operate more safely,” ATD officials said in an emailed statement to KXAN.