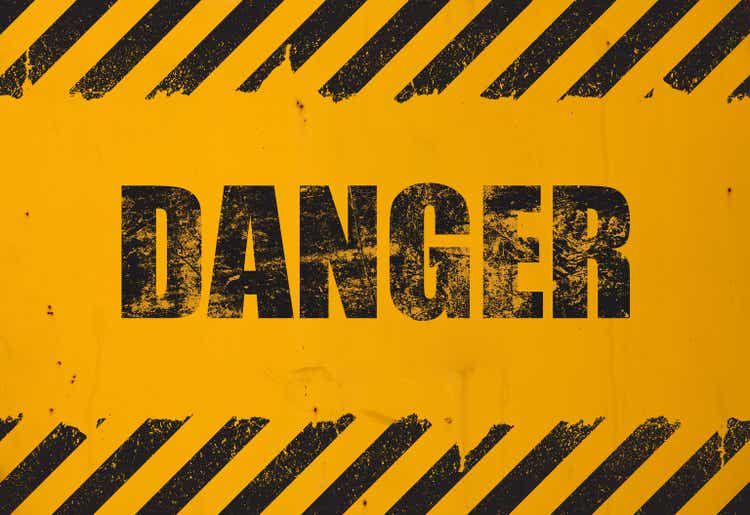 For the first time in a long time, the M2 money supply decreased at the end of 2022.

We believe this sudden trend reversal is a major warning sign for the economy and potentially the S&P 500 (NYSEARCA:SPY) by extension. In this article, we share our outlook for SPY and our investing approach in 2023.

Why The Money Supply Declined

The last time we saw any meaningful measure of money supply turn negative was in 1989 when the True Money Supply/Rothbard-Salerno Measure (which is M2 plus Treasury deposits at the Federal Reserve minus short-time deposits and retail money funds) slipped into negative territory and M2 was effectively flat. Now, however, both the TMS and M2 metrics have slipped into negative territory.

The reason for the rapid growth in money supply followed by this rapid reversal into negative territory should be pretty obvious: the Federal Reserve cut rates to essentially zero in the wake of the COVID-19 outbreak alongside aggressive government stimulus spending, resulting in a flood of money entering the economy. Since then, the government stimulus spending has slowed and the Federal Reserve has pivoted sharply towards raising interest rates rapidly while also beginning to shrink its balance sheet in response to high inflation. As a result, economic actors (ie, corporations and individuals) are increasingly incentivized to reduce their demand for money by reducing debt and increasing saving. When you combine the cessation of money printing at the Federal Reserve with the increasingly strong incentives for corporations and individuals to deleverage their balance sheets, a shrinking money supply is a very plausible outcome.

Why A Shrinking Money Supply Matters

While a declining amount of money in circulation does not necessarily guarantee an economic downturn, it can certainly serve as an indicator that one is coming. History has shown that recessions tend to be preceded by a slowdown in money supply growth.

Furthermore, as the Mises Institute pointed out recently, whenever TMS growth moves from trailing to exceeding M2 growth, it often signals that a recession is present. In fact, at the beginning of the last three recessions – 2001, 2007-2009, and 2020 – this phenomenon occurred and just occurred in 2022 again.

Why does a declining money supply correlate so strongly with the onset of recessions? Well, when an economy gets artificially stimulated by central bankers lowering interest rates well below the market rate and infusing enormous sums of money into the economy, it boosts demand above where it would otherwise have been. This causes entrepreneurs to miscalculate supply and demand since the signals being sent to them are distorted. As a result, capital gets misallocated to meet the demand created by these unnatural inflationary pressures. Ultimately this leads to a bubble and imbalance in the economy. We saw this clearly in the wake of the COVID-19 lockdowns and it is why the inflation proved to be much worse and stickier than the predicted transitory. The immense amount of artificial purchasing power poured into the economy simply overwhelmed the existing supply of goods and services, especially considering that the COVID-19 lockdowns artificially suppressed the supply of goods and services.

Since the economy becomes addicted to an ever-increasing supply of money to fuel further demand to keep up with the rising prices caused by the bubble, if/when policymakers pivot away from creating new money and instead begin raising interest rates and reducing the money supply in an attempt to balance the economy, the grossly misallocated capital during the preceding bubble is exposed, leading to economic contraction as businesses that misallocated their capital are forced to at a minimum reduce production capacity and in many cases are forced out of business altogether.

As a result, given that the money supply is now in decline, we can conclude that we are likely at the inflection point between inflation and deflation and that a recession is extremely likely to hit us in the near future.

This view is shared by Steve Hanke – Professor of Applied Economics at Johns Hopkins University – who views the probability of an upcoming recession at a whopping 90% due primarily to the shrinking money supply. He stated recently: :

What does a shrinking money supply mean for SPY? Well, for one it means that earnings among its constituent members are likely to struggle in coming quarters. In particular, businesses like automobiles (TSLA)(F)(GM) and real estate (VNQ) will probably experience an outsized share of headwinds as many of their sales are financed with debt. With a shrinking money supply due to rising interest rates, many marginal buyers are leaving the market for now, resulting in lower demand for debt-financed automobile and real estate purchases.

It also means that many of SPY’s constituents will suffer profit margin compression due to a rising cost of capital. A falling money supply means that capital becomes scarcer and therefore more expensive. Taking out new debt, raising new equity, or even simply refinancing existing debt will become more costly, resulting in value destruction for shareholders.

When you add to this the fact that SPY does not look undervalued and if anything is overvalued when compared to historical averages and valuation models such as the Yield Curve, the Buffett Indicator, and the P/E Ratio, the forward return prospects do not look bright. As a result, while the market does not necessarily appear to be in bubble territory at the moment or on the verge of an imminent crash (although anything is certainly possible), we expect below average total returns to be generated by SPY over the next 5 -10 years.

From an inverted yield curve to a shrinking money supply, the recession indicators are flashing everywhere it seems these days. While the SPY looks a little less frothy after last year’s major pullback:

it is still far from being cheap. As a result, at High Yield Investor we are staying out of major index funds like SPY and instead are picking pockets of value, particularly in the high yield space. Some of us favorite areas to invest at the moment are blue-chip dividend paying mining stocks like Barrick Gold (GOLD) and investment grade midstream MLPs like Enterprise Products Partners (EPD) which we believe will outperform in the coming recession.