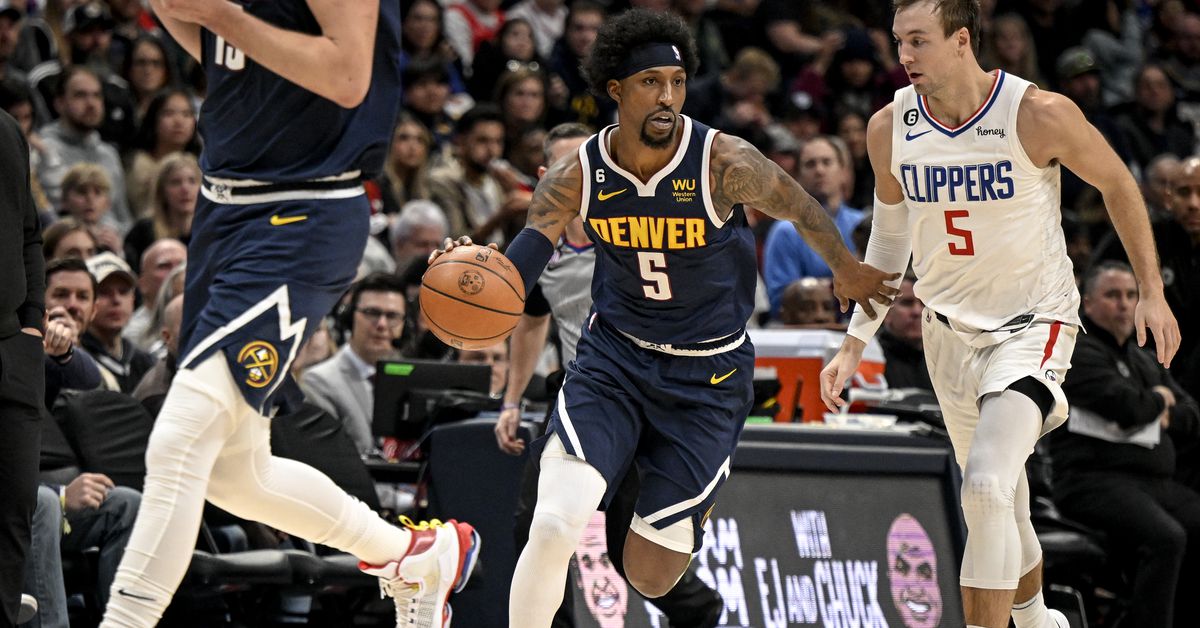 The Denver Nuggets (25-13) take down the Los Angeles Clippers (21-19) in dominating fashion, winning 122-91. Kawhi Leonard and Paul George both did not check in during the second half due to being down by double their own score. The Nuggets starters did not enter the game after the 3:21 mark of the 3rd quarter either. Denver was up by as many as 44 points, they only allowed 15 points in the first quarter and only 32 in the first half as well. The Nuggets have now won their last 7 of 8 games vs the Clippers.

Nikola Jokić finished with 12 points, 6 rebounds, and 9 assists, all in only 24 minutes played. Jamal Murray led all players with 19 points, shot 4-5 from three, 7-10 from the field, and scored 13 points just in the first quarter. Murray also only played 21 minutes. Vlatko Cancar finished with 15 points and 12 rebounds, his first career double-double.

Nikola Jokić wins the tip-off and knocks down a layup after grabbing a steal for the first basket of the game. Aaron Gordon then scores the next 6 points for the Nuggets, followed by 13 straight points for Jamal Murray. Denver held the Clippers to 4-21 shooting from the field and 1-11 shooting from three in the first quarter. The Nuggets opened up shooting 50% from three and from the field, but they ultimately cooled down and missed 5 straight shots before Jamal Murray made his 3rd three of the quarter.

Denver’s offense was flowing early on, the Nuggets had 8 assists on their first 10 made baskets. Jokić checks out with 2:00 remaining and with the Nuggets up by 13, Zeke Nnaji enters in his place. Bones Hyland and Vlatko Cancar knock down three-pointers of their own as Denver closes the quarter on a 12-2 run. The Clippers missed their last 7 shots and only scored on free throws in the last 3:58 of the quarter. Denver is up 32-15 after one.

Bruce Brown connects on his second three-pointer of the game to start the quarter. The Nuggets were on absolute fire from three to start the game, shooting 7-13 in the first 15 minutes of the game. The Clippers put together 4 straight scoring possessions, but Kentavious Caldwell-Pope knocked down back-to-back three-pointers and the Nuggets did not let off the throttle. Vlatko Cancar throws down a dunk and the Nuggets go up by 27, more than double the Clippers’ score at the time.

The Nuggets go on another 10-0 run with Jokić still on the bench, he comes back into the game with the Nuggets up by 20 and 5:41 to go. The Clippers couldn’t get anything going offensively, shooting 2-21 from three and 11-41 in the first half. The Nuggets have their biggest lead of the season, 35 points. Bones Hyland knocks down back-to-back threes and the Nuggets continue their 19-0 run. Jokić had 7 assists at the half, the Clippers had 5 as a team. The Clippers scored 9 of their 17 points of the quarter in the last 3:38 of the quarter. Nuggets go into halftime up by 34, 66-32.

The Clippers opened the second half with all bench players out there. Both the Nuggets and Clippers make their first 2 shots after halftime, and Jamal Murray knocks down yet another three-pointer. After allowing back-to-back baskets and an alley-oop after a turnover, Coach Malone calls a timeout while up by 32. MPJ drains a three-pointer and gets a tough finish to go at the rim. With 7 minutes to go in the 3rd, the Nuggets made 10 more threes (13-22) than the Clippers (3-25) while shooting 3 less. The Nuggets go on yet another 11-0 run and MPJ throws down a huge lob from the Joker.

Denver increases their lead to 40 points behind 7 straight points from Jokić. The Clippers get some energy behind a Terrance Mann tomahawk dunk and go on a 6-0 run of their own, followed by another Coach Malone timeout. Zeke Nnaji picks up a fantastic block and Bones Hyland finishes the possession with an awesome acrobatic finish. Vlatko Cancar makes 3 layups and makes the Nuggets total 100 points with 45 seconds to go. Denver enters the 4th up 102-59.

The Clippers still only have bench players on the court to start the quarter, they score 6 of the first 8 points. Denver only scores 4 points in the first 3 minutes of the quarter and Coach Malone calls another timeout. Nnaji finishes a tough and-1 dunk after Davon Reed knocks down a three. The Nuggets put the game away and maintained a solid effort throughout the entire game, even though it was too long before the final buzzer. Denver gets their first “Munder” of the season, holding the Clippers to only 90 points.

The Nuggets will take on the Cleveland Cavaliers (25-14) back in Ball Arena in less than 24 hours. With the way tonight’s game went, the Nuggets should be fully rested for tomorrow. The game tips off at 7:00 and is shaping up to be an exciting one. Donovan Mitchell is averaging 33.5 points over his last 4 games, including a historic 71-point game.