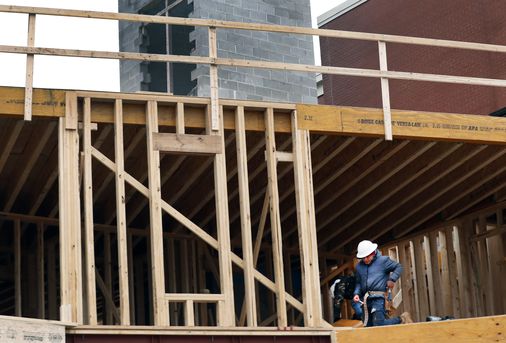 When asked whether he was concerned about a slowdown this coming year, though, BPDA director Arthur Jemison said he held a “contrarian opinion,” and pledged that City Hall would “take a very business-minded approach” toward identifying issues that hold up development .

“I think you’re going to find developers continuing to aggressively pursue approvals of development,” Jemison said. “We have a very significant number of projects in the pipeline seeking approval.”

Still, some developers say they’re looking at a holding period in 2023. Even without considering recently proposed changes to two city policies — inclusionary development, which requires new residential buildings to include affordable units, and linkage, which adds a per-square-foot fee on new commercial buildings — it’s been increasingly difficult to make projects “pencil out” economically.

Many real estate board members for years have been “stalwarts in producing a lot of housing,” Vasil said, but are now signaling: “We’re not really interested in expanding in the Boston market.” Their biggest concern, he said, is upcoming proposals by the Wu administration to cap rent increases, which would need approval on Beacon Hill.

And the Boston Municipal Research Bureau, a business-backed local government think tank, has urged Mayor Michelle Wu to proceed with caution when increasing inclusionary development and linkage fees, so as not to put too much of a burden on private development. Nearly three-quarters of the city’s revenue comes from property taxes, notes bureau president Pam Kocher, and that could be increasingly at-risk as big downtown employers shed office space amid a pandemic-era shift toward remote work.

“That’s not the city’s fault,” she said. “It’s just what we have inherited at this time in the city and the country’s experience.”

Construction costs are still at historic highs in Boston, climbing nearly 9 percent between the end of 2021 and 2022, according to consulting firm Rider Levett Bucknall. That’s more than twice the typical annual escalation of 4 percent. Costs have climbed steadily over the last year in a way Rider Levett hasn’t seen in the two decades it’s been compiling data, said Michael O’Reilly, the firm’s Boston office lead.

And that, along with interest rates and recession fears, could prompt a slowdown across a broad range of sectors, he said.

Still, that’s not to say activity will drop away altogether, O’Reilly said. Many projects are already planned and permitted and construction firms tell the firm their pipelines are full this year.

But the national Architectural Billings index, a key measure of nonresidential construction activity, has dropped year-over-year in all regions, save the South, with the steepest drops in the most recent report coming from the Northeast.

What’s more, demand for life sciences laboratories, which bolstered development in Greater Boston throughout most of the COVID-19 pandemic, has been receding to prepandemic levels. (Though there have been some recently proposed lab projects.) Some local developers have taken to pairing life sciences lab space with housing as a way to make projects economically feasible.

City Hall may be willing to help developers out, too, with the Wu administration last month floating the prospect of tax incentives and streamlined permitting for projects that lean in to some of the city’s key priorities.

“Projects that innovate in the areas of resilience, affordability, and equity will possibly receive consideration for tax relief and infrastructure support,” the BPDA said in a document issued in December when it unveiled the new affordable housing requirements. Jemison declined to share further details, saying the city would likely release more information early this year.

But even the concept of tax incentives for projects the city deems innovative could be a potential game changer, said real estate development attorney Matthew Kiefer.

“It’s been a long time since the city’s been willing to do that,” Kiefer said. “That’s a potential paradigm shift.”

Tax incentives could also help if the city pushes ahead with plans to convert underused office buildings to housing downtown, as has been considered by officials in Washington, DC and various other cities. One local landlord, who spoke with The Boston Globe on condition of anonymity, said they’d studied the cost of converting one of their older office buildings in the city and determined it wouldn’t be economically feasible without a subsidy.

But that’s down the road. Right now, Jemison said he’s focused on taking the more than 13,000 units and 19 million square feet of commercial space that has won BPDA approval — which is a relatively early step in the development process — and “getting that inventory into construction.” City data show 3,714 new units were actually produced in the city in 2022, according to the Mayor’s Office of Housing, up from 3,393 in 2021 and 3,272 in 2020. And, he said, a newly proposed permitting ombudsman can help pave the way for projects that have been approved but not yet acquired all the necessary licenses from various city agencies. By March, he said, the city will outline strategies on how to get projects that are approved into construction.

“We only make money on the stuff that’s built and occupied,” Jemison said. “The city benefits most when these projects are built.”