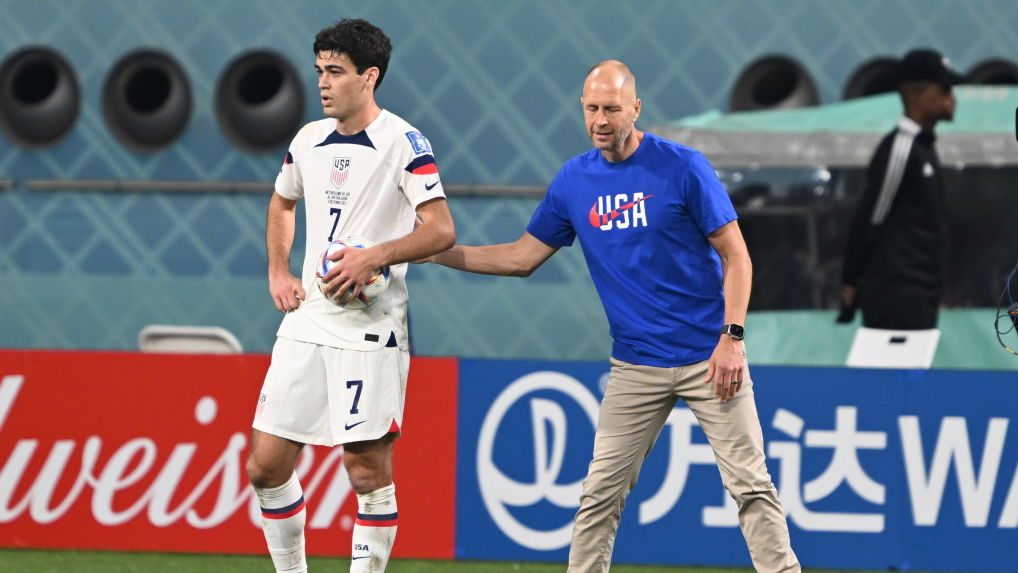 Gregg Berhalter, the United States men’s national team coach at the World Cup and a man who hopes to return to that post, spoke about a tumultuous period for his career and program in a previously-scheduled forum with the Harvard Business Review on Wednesday.

His words come two days after Berhalter revealed what he believed to be blackmail regarding a violent incident with his then-girlfriend and now-wife in 1991, and one day after it emerged that Danielle Reyna, mother of USMNT midfielder Giovanni Reyna, is responsible for reporting those allegations to the US Soccer Federation last month. The Reyna family confirmed in Wednesday statements to FOX Soccer’s Doug McIntyre that it was Danielle Reyna who spoke to the USSF

Gregg Berhalter admitted Tuesday that he, at age 18, kicked now-wife Rosalind after an argument at a bar spilled outside of the venue. Danielle Reyna said she was Rosalind’s roommate and that Gregg Berhalter has minimized the abusive incident in question, and that she wanted to speak up after Berhalter’s speech at a leadership summit resulted in public embarrassment to Giovanni Reyna.

[ MORE: How to watch Premier League in USA ]

Berhalter spoke out Thursday as part of a prescheduled broadcast with the Harvard Business Review’s “New World of Work,” as captured by Men In Blazers.

“The worst part of it for me is, you know, my heart aches for my wife,” Berhalter said. “You know, because it was her story to tell, whether she chose to or not, and that’s what really, really saddens me.”

Why did Danielle Reyna reveal abuse story to US Soccer?

Former USWNT player Danielle Reyna told McIntyre that she was motivated to act after Berhalter spoke out about her son’s poor attitude early in last month’s World Cup in Qatar, using the story of an unnamed player during a speaking engagement. Giovanni Reyna was told he’d have a limited role at the World Cup and Berhalter said he almost sent him home, eventually limiting the young Borussia Dortmund star to 52 minutes spread between two games.

Danielle Reyna said, “I want to be very clear that I did not ask for Gregg to be fired, I did not make any threats, and I don’t know anything about any blackmail attempts.”

Giovanni’s father — former USMNT player and current Austin FC director Claudio Reyna — told McIntyre that he supported his wife and her statement, adding that he was upset by Berhatler’s post-World Cup comments about Giovanni and that he appealed to sporting director Earnie Stewart to prevent additional comments from Berhalter.

Claudio Reyna also told McIntyre that he spoke to his former teammates Stewart and USMNT general manager Brian McBride at the World Cup regarding his son’s disappointing experience but did not make any threats.

Berhalter, in a loaded statement, said if he could do it again he would not have spoken about the unnamed player in his speech.

He also revealed that he’d like to continue as US Soccer head coach into the future, something of which he’d previously been purposefully vague.

Stewart said that the USSF was happy with the way Berhalter’s team looked in qualifying and at the tournament.

“After every World Cup — youth national teams, extended, and senior — we always will have a review of what went on during the world championship in trying to better ourselves and after a longer term,” Stewart said Wednesday, “Including how our style of play and how we need to perform at a World Cup. I was pleased with that piece.

“We’re an ambitious organization and we want to make sure we do really, really well in 2026. We’ll continue with the review process of the World Cup and a longer period of time.”