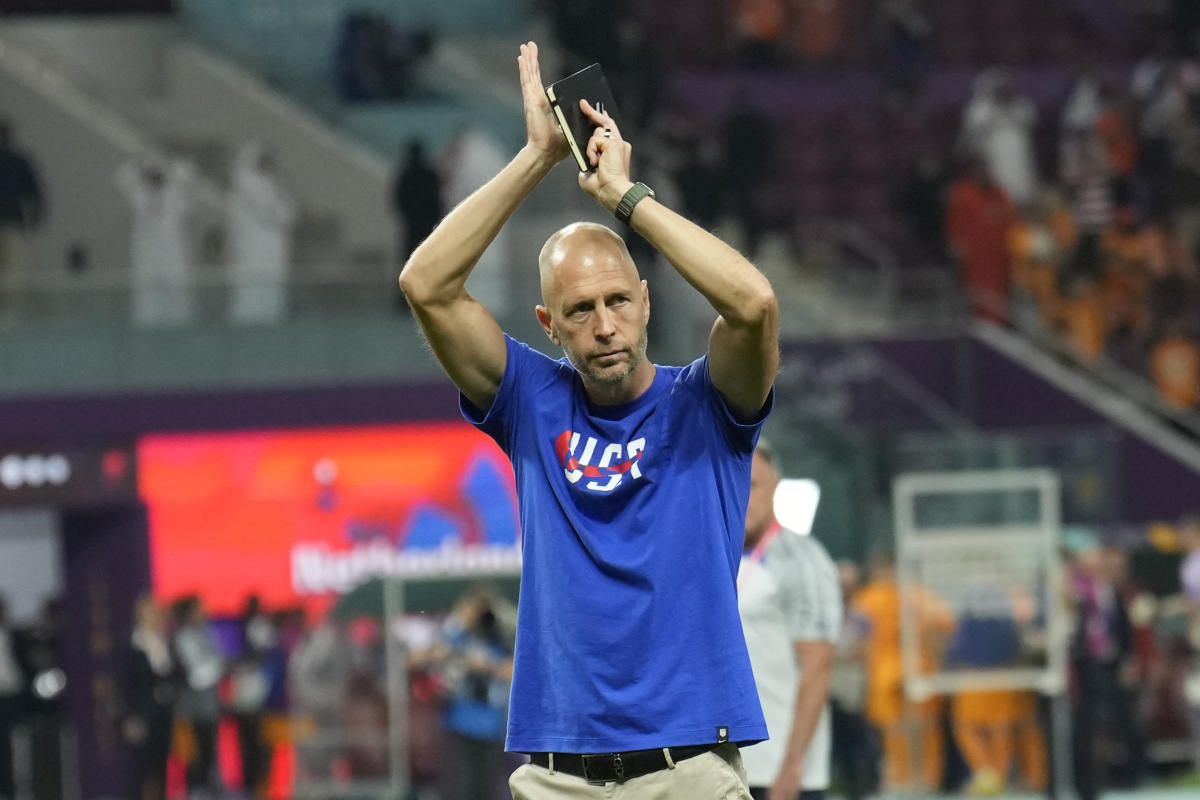 Gregg Berhalter said Thursday that he would “like to continue in my role” as US men’s national team head coach.

Berhalter’s contract expired on Dec. 31. US Soccer is currently reviewing its performance over the past four years, and specifically at the 2022 World Cup. The review has been complicated by an investigation into a decades-old domestic violence incident involving Berhalter and his now-wife, Rosalind. The incident was brought to US Soccer officials by the parents of midfielder Gio Reyna amid friction between Berhalter and Gio.

With the investigation and the review both ongoing, US Soccer tabbed Anthony Hudson, one of Berhalter’s assistants, to take charge of the USMNT at a January training camp. But US Soccer sporting director Earnie Stewart confirmed Wednesday that Berhalter remains “under consideration” for the job going forward, pending the investigation.

Berhalter addressed and detailed the early-’90s domestic violence incident in a Tuesday statement. On Thursday, he gave his first media interview since the World Cup Harvard Business Review, via LinkedIn. When asked about the Reyna saga, he said his “entire family is saddened by these events.”

“The worst part of it for me is, my heart aches for my wife,” he said. “Because it was her story to tell, if she chose to or not.”

Instead, when Danielle and Claudio Reyna, Gio’s parents, brought the decades-old incident to Stewart on Dec. 11, Stewart was obliged to report it. US Soccer hired a law firm to investigate it. That prompted Berhalter to publicly disclose it for the first time.

“I feel tremendously bad that my profession had to bring this to the public light,” Berhalter said Thursday.

In the Tuesday statement, which was signed by both Gregg and Rosalind, Gregg wrote that, a few months into their relationship, while in college at the University of North Carolina, they were “out drinking at a local bar” when they “had a heated argument that continued outside. It became physical and I kicked her in the legs.” (Danielle Reyna said Wednesday that Gregg’s description “significantly minimize[d] the abuse on the night in question.”)

Gregg and Rosalind later reconciled, got married in the late ’90s, and have four children. Berhalter said Thursday that their relationship remains “a loving relationship, a devoted relationship.” After feeling the need to unearth the decades-old trauma, he said the family is “taking it one day at a time, and moving forward.”

He had agreed to Thursday’s Harvard Business Review interview long before the saga burst into public view on Tuesday and Wednesday. “We committed to doing this before all this stuff happened, and I wasn’t gonna back down from it, because I said I would do it,” Berhalter said, and then he answered questions for 30 minutes.

When asked whether he’d like to continue as USMNT head coach over the next four years, he said:

“It’s a fantastic group of players. A super high potential in this group. And we’re competing in the World Cup in North America in 2026. So it would be an amazing challenge for this team.

“When we started in 2018, we wanted to change the way the world views American soccer. And I think when you ask around the world now about our team, the world sees us in a completely different light. But now it’s about being able to take that next step. And that next step is doing something that no US team has ever done, and that’s get to the semifinals and see what happens from there.

“So there’s a lot of great challenges involved. And of course I’d like to continue in my role.”

He also addressed his early December comments that led Danielle Reyna to speak to Stewart. At a HOW Institute leadership conference that Berhalter thought was “off the record,” he spoke about how he almost sent an unnamed USMNT player home from the World Cup in Qatar. His comments were erroneously published by the Charter newsletter. Media reports soon revealed that the player whom Berhalter had described was Gio Reyna.

When asked Thursday whether he had any regrets, Berhalter said, in part: “If I had to do it all over again, I wouldn’t have told that story [about the unnamed player at the HOW event]. It brought too much unwarranted attention to an overall shining example of team culture and teamwork. So that would be something that I would go back and change, for sure.”

His interviewer, Adi Ignatius, said multiple times that the roughly 200 people in the room at the HOW conference “all walked away not even thinking about individual players or anything like that. … I listened to you talk, you didn’t throw any of your players under the bus.”

Ignatius also opened the interview by describing the subsequent saga as: “Berhalter’s decision to limit the playing time of one of his young players prompted the player’s parents to try to blackmail him by threatening to expose an incident more than three decades ago where Berhalter and a woman got into a fight. This is the ultimate soccer mom nightmare.”

Berhalter never disputed nor corrected that characterization of the events.

When asked, “given what has happened with the Reynas,” how he would go about rebuilding trust, Berhalter said:

“Trust is something that takes a long time to build, but can go away really quickly. What I would say is, you have to be consistent with who you are, and you have to have clear values. And if you are, people can see that, and they can trust that consistency.