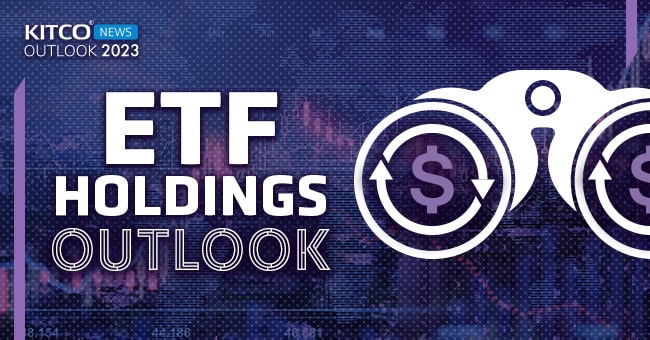 (Kitco News) Global gold-backed exchange-traded funds (ETFs) saw outflows of $3 billion last year, which is down 3% on the year and translates to around 110 metric tons worth of bullion, according to the World Gold Council (WGC ).

At the end of December 2022, global gold ETF assets under management were at $203 billion, which equated to 3,473 tons, the WGC said in its report published Monday.

Last year was filled with mixed messages for gold-backed ETFs and the gold price.

Even though gold finished the year flat, the precious metal saw fluctuations of about $450. The yellow metal kicked off the year strong by rallying above $2,000 an ounce in the spring. Then it hit the lows near $1,630 an ounce in the fall. Gold ended up finishing the year at just above $1,822 an ounce after starting at around $1,828 an ounce.

For gold-backed ETFs, it was a similar story of strong demand at the beginning of the year based on increased geopolitical concerns. And a trend of outflows after the Federal Reserve began its historic tightening cycle that saw the most rapid hiking pace since the early 1980s, with rates climbing by 425 basis points in 2022.

The biggest drag on ETF demand came from North American and Asian markets. The former witnessed outflows of $2.7 billion and was led by the two largest ETFs — SPDR Gold Shares and iShares Gold Trust.

“Higher yields and a stronger dollar weighed heavily on gold in the months that followed. This weakening sentiment was also reflected in managed money net positioning on COMEX, which oscillated between net long and net short in H2 2022,” the WGC said.

ETFs in Asia saw demand drop by $1 billion, led by a fall in Chinese funds’ gold holdings. “Unlike North America and Europe, Asian funds did not see a surge of demand in the first few months of the year as higher local gold prices incentivized profit-taking. This was particularly evident in China, where investors adopted a more tactical approach throughout much of 2022,” the WGC pointed out.

Looking at the last month of the year, the WGC noted that ETFs saw their eighth month of consecutive negative demand in December, with global holdings falling by $534 million.

But an important trend to keep an eye on is that outflows are clearly slowing down. “The pace of outflows/negative demand continued to slow, helped by a 3% increase in the gold price during the month,” the WGC said.

And North American funds even posted their first month of positive demand since April, which was at $532 million in December. “However, this was the main bright spot as all other regions were negative,” the report added.

The outlook for next year has a positive bias to it, according to the WGC. “Gold’s performance will likely continue to be driven by the interplay between inflation and central-bank intervention. A mixture of headwinds and tailwinds implies gold’s performance in the next twelve months could be similar to that of 2022: stable with a positive bias,” the report said.

But there is always room for a more extreme outcome as the global situation remains highly uncertain.

In its 2023 outlook, the WGC noted that gold had seen positive returns during five of the last seven recessions.

“A sharp retrenchment in growth is sufficient for gold to do well, particularly if inflation is also high or rising,” the report said. “Historically, tightening cycles have ended in a recession.”

Many analysts feel that the lack of interest from ETF investors kept gold from rallying last year, as ETF flows have a significant impact on the price of gold. And until that component is back in play, analysts don’t believe gold can see a lasting rally.

This year’s story for the gold market has been significant outflows from ETFs as investors exited positions that did not bring them profits, Kathleen Kelley, chief executive of research firm Queen Anne’s Gate Capital, told Kitco News.

“During COVID, a lot of people put part of their assets into gold, especially into ETFs,” Kelley said in a recent interview. “Everyone piled into gold ETFs, and gold ETFs went from 80 million ounces up to 110 million ounces. A lot of those purchases are now underwater.”