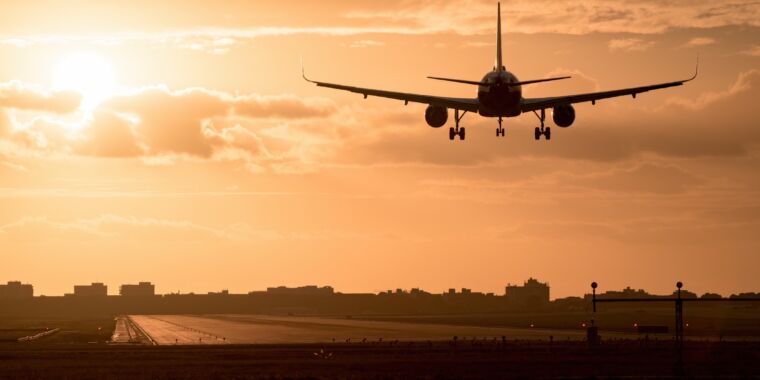 The Federal Aviation Administration will give airlines another year to fix or replace airplane altimeters that can’t filter out cellular transmissions from outside their allotted frequencies. In a notice of proposed rulemaking (NPRM) released today, the FAA proposed a deadline of February 1, 2024, to replace or retrofit faulty altimeters, which are used by airplanes to measure altitude.

The requirement could finally end a dispute between the aviation and wireless industries, which has prevented AT&T and Verizon from fully deploying 5G on the C-Band spectrum licenses the wireless carriers purchased for a combined $69 billion. Airplane altimeters rely on a spectrum from 4.2 GHz to 4.4 GHz, but some cannot filter out 5G transmissions from the carriers’ spectrum in the 3.7-3.98 GHz range.

The FAA said it “expects erroneous system warnings due to a malfunctioning radio altimeter to lead to flight crew becoming desensitized to system warnings. Such desensitization negates the safety benefits of the warning itself and can lead to a catastrophic event.”

The FAA had said in June 2022 that airlines must replace or retrofit faulty altimeters “as soon as possible.” But the notice issued today said February 1, 2024, “is the date the FAA has determined to be as soon as reasonably practical, consistent with FAA policy.”

The FAA will take public comments on its new proposal for 30 days before finalizing it. A Bloomberg report quoted lobby group Airlines for America as saying that airlines “are working diligently to ensure ﬂeets are equipped with compliant radio altimeters, but global supply chains continue to lag behind current demand. Any government deadline must consider this reality.”

The proposed rule would affect airplanes operating under Part 121 certificates. Those certificates are for carriers with scheduled air service, which generally includes “large, US-based airlines, regional air carriers, and all cargo operators,” the FAA says.

“To minimize the number of erroneous system messages and the unsafe condition they produce, the FAA is proposing to require all airplanes operating under part 121 meet the PSD [power spectral density] performance curve to operate in the contiguous US after February 1, 2024,” the notice said.

Between now and the 2024 deadline, airplanes continuing to use faulty altimeters have to follow certain limits during landings. A December 2021 Airworthiness Directive “forbid[ed] certain operations requiring radio altimeter data when in the presence of 5G C-Band interference.”

The Federal Communications Commission in February 2020 approved mobile use in the C-Band after considering complaints from the airline industry. The FCC concluded that harmful interference to altimeters was unlikely to occur “under reasonable scenarios” because of the 220 MHz guard band between 5G and altimeter operations and power limits the FCC required for C-Band transmissions.

But airlines weren’t prepared for the C-Band launches originally scheduled to begin in December 2021. AT&T and Verizon agreed to a nationwide delay for about six weeks and to limits on deployment near airports. The deployment limits around airports were initially set to expire in July 2022, but carriers later agreed to maintain some limits in the airport areas until July 2023.

Altimeters were originally designed decades ago when nearby spectrum bands only contained low-power operations, such as satellites. “This led the early designers of the altimeters to decide they really could ignore their assigned spectrum boundaries, and as a result they allowed transmitted energy far outside their band into the receiver,” expert Dennis Roberson explained at a Congressional hearing in February 2022.

The altimeter problems spurred the FCC to launch an inquiry into poorly designed wireless devices that receive transmissions from outside their allotted frequencies. The inquiry could result in new regulations for wireless receivers; the FCC has traditionally imposed limits on transmitters only.