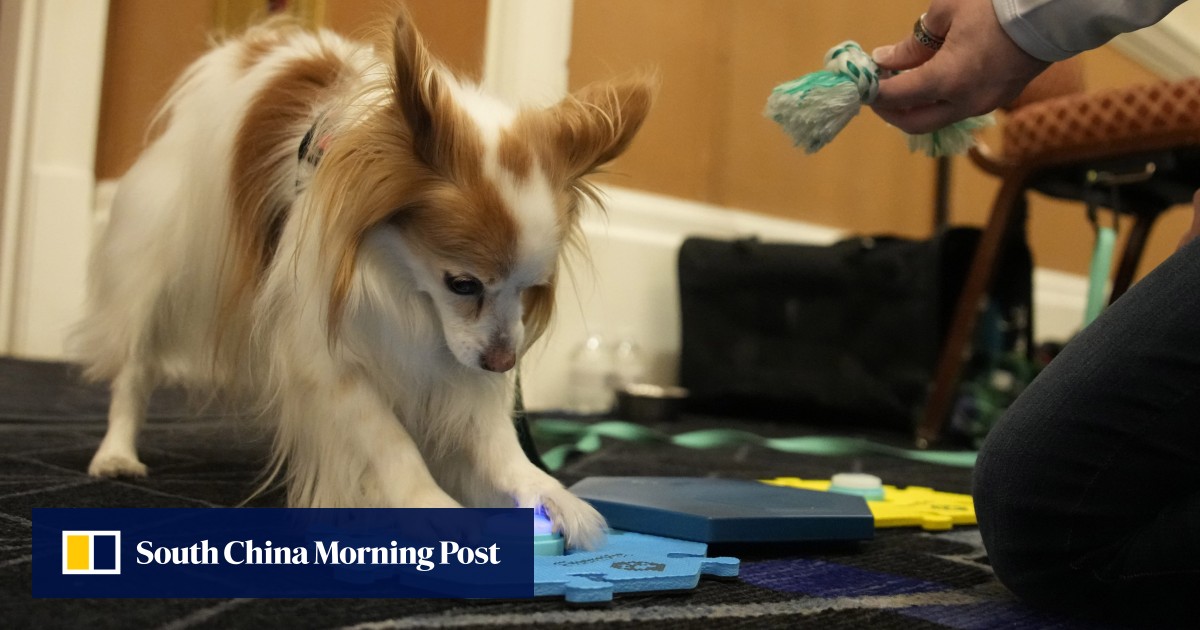 The device looks something like a machine you might find at the eye doctor, but with screens on the front. The person taking part from afar looks like they are there in 3D and when they look around or nod, the machine also moves.

Wehead works with standard computer or smartphone webcams. “If there are a few people around the table and just one screen, not everyone can see the screen, and the person in the laptop, he or she is not able to see everyone,” Wehead creator Ilia Sedoshkin said. “That’s the obvious application.

“But for people who spend like 40 hours a week in their home office, they don’t see other people a lot. So feeling the real person in the room, using some space on your table, can give you less loneliness.”

FluentPet says you can train your pet to push its hextile buttons if it is hungry, needs to go outside or wants to play. Photo: AP

Have you ever wondered what your dog would say if it could speak to you? FluentPet promises the next best thing – buttons the company says you can train your pet to push if it is hungry, needs to go outside or wants to play.

The buttons come in a hexagon-shaped plastic mat called a hextile. Hextiles can be connected to each other to form a bigger collection of buttons.

“We find that, actually, when dogs kind of know that they’re being understood because they have the precision and specificity of the buttons, then they complain less because they’re no longer wondering whether they actually communicated what they wanted to,” said Leo Trottier, FluentPet CEO.

At CES, the company announced FluentPet Connect, a new app that notifies owners when their dog presses a button and collects data on how the buttons are used.

FluentPet’s starter kit comes with hextiles, a speaker and six buttons for US$159.95. The app does not require a subscription.

Adam the robot can make any boba tea, or bubble tea, drink you like. Photo: AP

From milk tea to passion fruit, Adam the robot can make any boba tea, or bubble tea, drink you like.

Adam can also function as a bartender or barista, but he made it bubble tea for delighted CES attendees who used digital touch screens to select their drinks.

The two-armed robot has two grip handles that can be customized to make specific drinks. Photo: AP

“Adam is intended to be basically a way to attract guests and a way to make drinks fully automated and very efficient,” Timothy Tanksley of Richtech Robotics said.

The two-armed robot has two grip handles that can be customized to make specific drinks. While taking a break from mixing drinks, Adam can dance to keep people entertained.

Adam, which can be rented for events or hired full-time, is among a range of robots on display at CES this week doing a variety of tasks, from disinfecting surfaces to making deliveries.

With GrowUp, customers can make nut milk at home in minutes. Photo: AP

During the pandemic shutdowns in 2020, California resident Luiz Rapacci had a hard time finding his favorite almond milk at grocery stores. He looked up online recipes to make his own, but they were messy and time-consuming.

Almost three years later, Rapacci is at CES to unveil his nut milk brewing machine, the GrowUp brewer. With GrowUp, customers can make nut milk at home in minutes with water and their chosen variety, from cashews and walnuts to almonds and pistachiosRapacci said.

The machine costs US$599 and is available now for pre-order.

The Fufuly pillow can help users relax by mimicking the rhythm of breathing. Photo: Reuters

Need a break? Japan’s Yukai Engineering says its robotic Fufuly pillow can help users relax by mimicking the rhythm of breathing. The soft, fluffy pillow gently expands and contracts, vibrating as you hold it against your stomach.

The idea is that you will breathe more slowly and deeply as your breath starts to sync with the movement of the pillow. It was developed based on research done at the University of Tokyo. Yukai CEO Shunsuke Aoki said the pillow can help remote workers who struggle to switch off from their jobs.

The version on display at CES is a prototype. The company is looking for partners and hopes to start producing it this year.

L’Oreal’s Brow Magic is bringing augmented reality to your eyebrows.

The company’s app scans your face and uses AR to make personalized recommendations for choices of shape, thickness and effect. You apply a primer, then the Brow Magic device uses 2,400 tiny nozzles to brush over and paint your eyebrows.

The make-up in Brow Magic, which is expected to launch later this year, can last up to two days and be taken off with regular make-up remover.