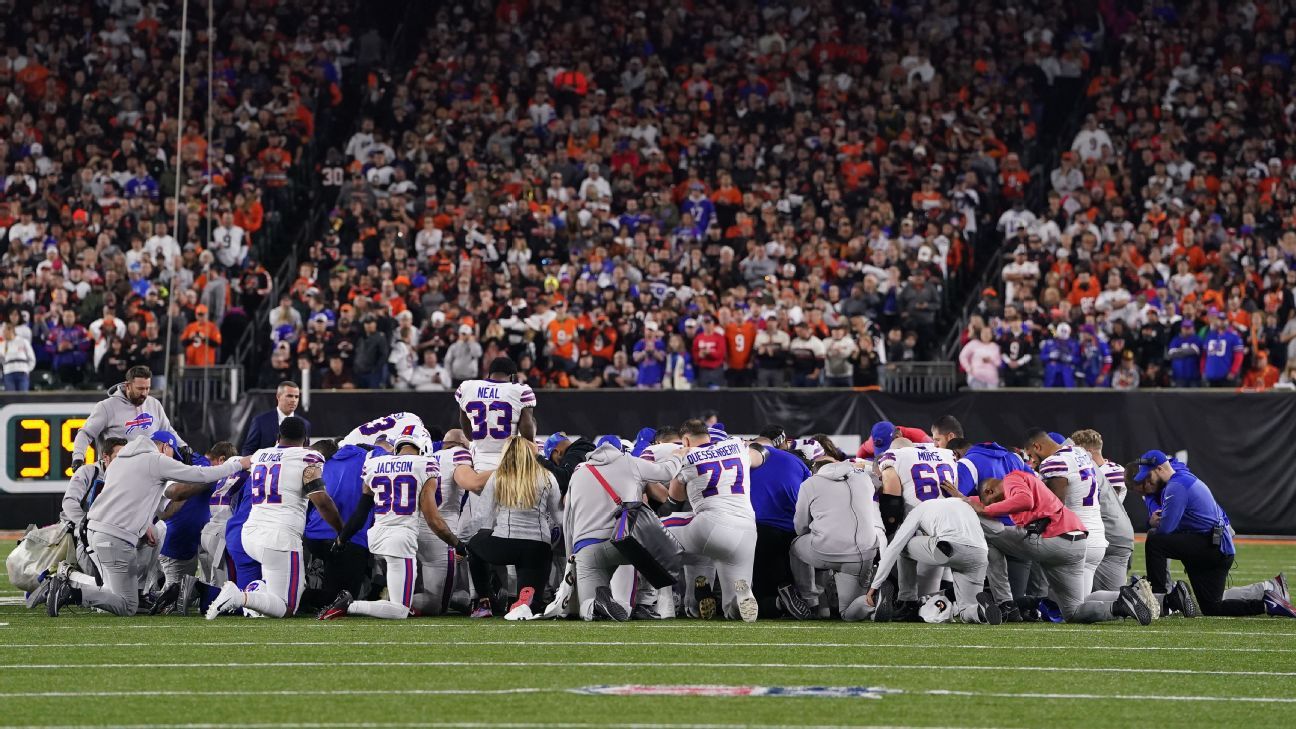 CINCINNATI — The Week 17 game between the Bengals and Bills has been canceled and will not continue, the league announced Thursday night.

Monday’s game was suspended with less than six minutes left in the first quarter when Buffalo safety Damar Hamlin went into cardiac arrest after making a tackle. His heartbeat was restored on the field before he was transported to the University of Cincinnati Medical Center.

“This has been a very difficult week,” NFL commissioner Roger Goodell said in a statement Thursday. “We continue to focus on the recovery of Damar Hamlin and are encouraged by the improvements in his condition as well as the tremendous outpouring of support and care for Damar and his family from across the country. We are also incredibly appreciative of the amazing work of the medical personnel and commend each and every one of them.”

Doctors said earlier in the day that Hamlin has shown “substantial improvement,” including communicating through writing and moving his hands and feet, although he remains considered critically ill.

In announcing the decision to cancel the game, the NFL cited three key factors: The outcome would have no bearing on which teams qualified for the postseason; playing the game would have altered the playoff schedule for the remaining teams; and not playing the game would allow all clubs to know the postseason possibilities before the start of Week 18.

At the time of the stoppage, the Bengals were leading 7-3. NFL officials have maintained that there were no plans for the game to continue Monday following Hamlin’s collapse and transportation to the hospital.

Buffalo (12-3) entered Week 17 tied with the Kansas City Chiefs (now 13-3) for the best record in the AFC but held the head-to-head tiebreaker. Cincinnati (11-4) trailed both teams by one game but would have held a three-way tiebreaker with a win over the Bills. The Bengals, now the AFC North champions, beat the Chiefs in Week 13 in a rematch of last year’s AFC Championship Game.

Because of the canceled game, the league’s owners will vote Friday — with 24 of 32 needed (three-fourths majority) to approve — on scenarios approved by the competition committee Thursday that involve a neutral site for an AFC Championship Game. Those are dependent on Week 18 outcomes:

• If Buffalo and Kansas City both win or tie, a Bills-Chiefs championship game will be at a neutral site.

• If Buffalo and Kansas City both lose and Baltimore wins or ties, a Bills-Chiefs championship game will be at a neutral site.

• If Buffalo and Kansas City both lose and Cincinnati wins, a Bills or Bengals vs. Chiefs championship game will be at a neutral site.

The potential neutral sites have not yet been determined. The seeds will hold up throughout the playoffs.

If the Baltimore Ravens win and are matched against Cincinnati in an AFC wild-card game, the site will be determined by a coin flip. If Cincinnati wins or if the two teams are not matched against each other after a potential Ravens win, regular scheduling procedures will go into effect.

Bengals executive vice president Katie Blackburn is on the competition committee, which approved the scenarios Thursday. In a memo obtained by ESPN’s Seth Wickersham, Blackburn urged the committee members to vote against the scenarios. Her reasoning stemmed from the timing of a rule change away from the standard of winning percentages used in this scenario.

“The proper process for making a rule change (sic) is in the off-season,” Blackburn wrote. “It is not appropriate to put teams in a position to vote for something that may introduce bias, favor one team over another or impact their own situation when the vote takes place immediately before the playoffs.”

In his statement, Goodell said he recognizes “there is no perfect solution.”

“As we considered the football schedule, our principles have been to limit disruption across the league and minimize competitive inequities,” he said.

On Wednesday, Bengals coach Zac Taylor said the team was preparing to face the Ravens as the league mulled the future of the Bills-Bengals contest.

“We’ll let those decisions take place among those who want to make them,” Taylor said. “All that is really in front of us right now is to get ready for Baltimore on Sunday.”

ESPN’s Adam Schefter and Dan Graziano contributed to this report.